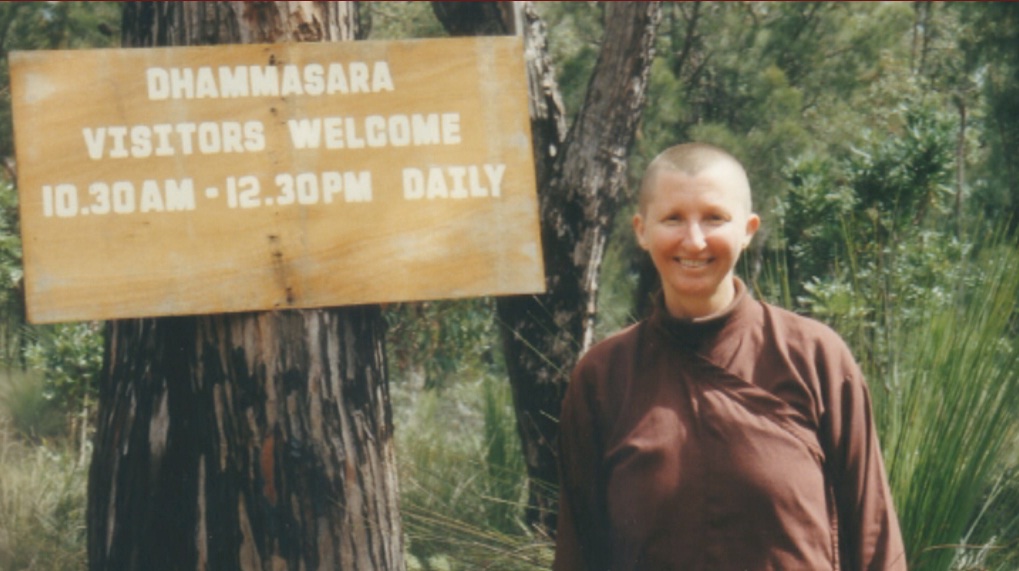 Ajahn Vayama was one of the very first Australian women to ordain as a Buddhist nun in Asia, and is the founding abbot of Dhammasara Monastery in Gidgegannup, Australia. 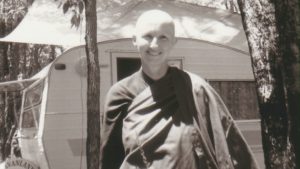 From an early age Ajahn Vayama was very keen to offer help and support to others in need. She often reflected on the reality of suffering and was involved in collecting funds for many aid organisations, including Red Cross and Freedom From Hunger Fund.

After finishing high school she studied at the University of Sydney to become as a social worker. Compassion for others suffering always motivating her to take action, she pioneered the first women’s refuge on the north coast of New South Wales. Through her experiences as a social worker, she witnessed much emotional and physical suffering. Yet in spite of all the efforts she made, the suffering seemed endless. At times she felt there was little she could do to really help people. Even when her help was welcomed and well utilised it was still largely up to those individuals to continue to maintain any lasting changes in their own lives.

At the age of 25, Ajahn Vayama travelled to Sri Lanka, where she met her first Buddhist monk , Venerable Nyanaponika and began reading Buddhist literature. This was the turning point for her. She decided to take up the Buddha’s Noble Eightfold Path.

In her mid-twenties the sudden death of her father was soon followed by news that her mother had been diagnosed with breast cancer. Thankfully her mother recovered from this first bout of cancer, leaving her free to travel again.

Having been inspired by the work of Mother Teresa, in 1980 A>jahn Vayama worked in Calcutta as a volunteer, helping people who were desperately sick and poor. Although deeply fulfilling at one level, at a deeper level the longing to find an end to all suffering continued to agitate inside of her.

Caring deeply for both her parents, Ajahn Vayama was a loving and devoted daughter. When her mother’s cancer returned in 1981, she quickly returned from Calcutta to make sure she was there to provide her mother with comfort and care every step of the way until her mother passed.

In 1982 she discovered Wat Buddha Dhamma- a monastery on the outskirts of Sydney. It was established by Ayya Khema, a western Theravada nun from Germany- an internationally renowned Buddhist teacher who led many retreats and wrote several well-known Buddhist books. Hearing the Buddha’s teachings from a female teacher, Ajahn Vayama’s commitment to the Buddha’s Path deepened.

In 1984 Ayya Khema established a nuns’ monastery in Sri Lanka, and invited AjahnVayama to join her there. Welcoming the opportunity, Ajahn Vayama soon became an anagarikaa under Ayya Khema’s tutelage, and in 1985 she ordained as a Ten Precept Nun, whereby she gave up all her material wealth and possessions to become a full-time alms mendicant. Buddhism seemed to answer all the important questions she had been seeking to answer since childhood: What is the nature of suffering? What are its causes? And is there a way to be freed from suffering?

She spent the next ten years living in Sri Lanka. For two years she lived at Parappuduwa Nun’s Island in Dodanduwa, Sri Lanka, together with her teacher, Ayya Khema, and several other nuns and anagarikaas. The rest of the time was spent living wiith one other Sri Lankan nun among the villagers in Dodanuwa, Ambalangoda and Dickwella.

There was much political unrest in Sri Lanka at that time, and since the nuns were being supported by people from both sides of the conflict, she witnessed that suffering was widespread amongst all the people who shared their stories with her. This confirmed the Buddha’s teaching that the roots of suffering – namely greed, hatred and delusion – are within the hearts of everyone; no-one is excluded.

Upon leaving Sri Lanka, she spent one year at Amaravati Monastery in England, living in a community of nuns and monks, under the guidance of Ajahn  Sumedho.

In 1997 she returned to Sydney, Australia to participate in a retreat and to once again take up residence here. In her heart she held a long-term vision of making Buddhism more available to people in Australia.

Her dream was soon to be realised, when she was invited by Ajahn Brahmavamso ( spiritual director of the Buddhist Society of Western Australia and abbot of Bodhinyana Monks  Monastery in Serpentine ) to inaugurate a nuns’ monastery in Gidgegannup, Western Australia, located approximately 45 minutes drive away from Perth’s city centre. Ajahn Vayama did not shy away from the challenge. She saw it as a wonderful opportunity to help create a space where women could come from all over the globe to train to become Buddhist Theravadan nuns. 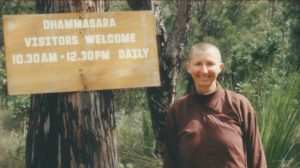 On 583 acres of rugged bush land Ajahn Vayama spent her first 2 years living alone in a small well-used caravan. Without running water, without electricity, she was completely dependent on the kindness and generosity of faithful lay supporters, most of whom were complete strangers to her in the begining. Her toilet was a hole in the ground, and the only way she could contact other people was to walk to the highest points on the property in the hope of finding a spot where her emergency mobile phone might be able to pick up some reception – those spots were few and far between. There were days when no-one came to offer dana, and she was left to fast. Other times it was bitterly cold, or boiling hot, and there was no-where comfortable she could escape to. 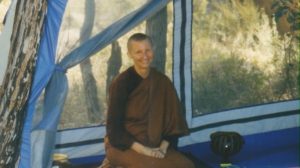 Ajahn Vayama inside the original blue dana tent in December 1998

There was much work to be done, and many practical matters to deal with in order to develop a fully functioning training monastery for nuns. Until the completion of the nuns’ cottage in early 2001, lay supporters made daily food offerings to her in a small tent. This was later replaced with a small garden shed.

Ajahn Vayama described her solitary life in the bush as physically demanding, sometimes frightening, yet most often soothing and peaceful because she was living so closely with nature. She felt deeply connected to the land, the trees, the animals, the rocks, the waterways and the bird-life there. 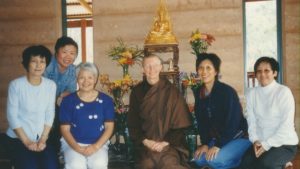 Ajahn Vayama and the famous Friday dana group, during their first dana at the Nuns Cottage in 2001

In July 2001 a long-term Australian female practitioner and benefactor shaved her head and became Ajahn Vayama’s first anagarikaas ( trainee ).  After a total of two years training on the eight precepts, she requested ordination and became Ajahn Vayama’s first Ten Precept monastic disciple. The nuns community then continued to grow, with women from around the globe making the requests to come and stay there. With the very limited accommodation and Ajahn Vayama’s busy schedule it was not possible to allow everyone who took an interest in the monastery to come and stay there. Careful consideration of people’s life circumstances, health conditions, family commitments, work capacities, and the like were necessary to ensure both the candidates and the monastery would both benefit from the situation. Applicants needed to have enough strength of body and mind to endure the challenge of a developing monastery in a very rugged environment.

Ajahn Vayama provided daily teachings and provided answers to people’s Dhamma questions to all dana visitors at the monastery who requested it. She also gave public teachings at the Dhammaloka city centre, led weekend retreats at Safety Bay, led the youth group, participated in inter-faith dialogues and seminars, accepted interviews from members of the media, and responded to all phone calls and letters requesting her spiritual counsel. 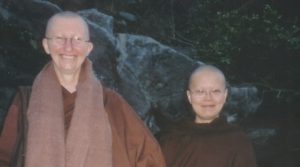 Ajahn Vayama and Venerable Seri on pilgrimage to India in 2006

Ajahn Vayama was instrumental in the growth and world-wide recognition of the Dhammasara  Nuns’ Monastery. This monastery is the first of  its kind in the Southern Hemisphere – a place where women can train to become nuns, living according to the Vinaya, and remaining largely self-governing, living autonomously from monks.

Prior to 2009 Bhikkhuni ordination was not available in Australia and  Ajahn Vayama was content to remain as a Ten Precept nun and was determined to keep her precepts and continue her practice.

Yet she continued to make efforts to move the female Buddhist sangha forward. Even though unacknowledged, she kept the rules as she could of the Bhikkhuni Vinaya, and she was active in contributing to the global dialogue about the future of Theravadan nuns.

As the monastery grew and developed, tasks (such as removing weeds or pruning trees) that are prohibited for Bhikkhunis could be delegated to the growing number of trainees and dedicated lay supporters. And with the flourishing support and encouragement for women to take higher ordination, on 22nd October 2009, conditions finally came together to allow Ajahn Vayama to take higher ordination and became a full member of the Sangha, a Bhikkhuni. This ordination ceremony was a deeply auspicious occasion as it re-established the Buddha’s four- fold assembly of nuns and monks, laywomen and laymen in Western Australia; and formally elevated Buddhist Theravadan nuns to full membership of the Buddhist Sangha. This occasion was the first time Theravadan nuns had ever been granted higher ordination on their home ground in the western world.

Ajahn Vayama is a very knowledgable teacher and caring advisor. For her, the aim of Buddhist practice is to live simply, harmlessly and contentedly; free from the entanglements of material and physical desires. Her sole purpose and direction in life is towards spiritual growth. Those who know her cannot help but be inspired.

Her way of life is very disciplined, and has been at times austere, as she has attempted to live purely as possible according to the Noble Eightfold Path laid down by the Lord Buddha some 2600 years ago. The rules prevent nuns and monks from handling money. So they are completely dependent on lay supporters to provide them with all food (they are prohibited from growing their own food), clothing, shelter and medicines. Thus their lives depend on the generosity of lay supporters in exchange for sharing their knowledge, guidance, wisdom and insights gained from their full-time study and practice of Dhamma, the teaching of the Buddha.

Monks and nuns are not allowed to drive motor vehicles, drink alcohol, visit places of entertainment, or use anything to beautify the body such as make-up, fragrance or jewellery. Moreover they are prohibited from spending time alone with a member of the opposite sex.

Many of the rules could be preceived as restrictions to lay people, yet Ajahn Vayama sees these rules as training guidelines offered by the Lord Buddha to help simplify one’s lifestyle and keep the mind calm, clear and tranquil. They encourage the mind to let go of worldly ways and find peace within simplicity.

Ajahn Vayama was the founding abbot of Dhammasara Nuns’ Monastery. As abbot she was the very efficient and extremely hard-working. For twelve years she was a trailblazer in the Buddhist Society of Western Australia; she was the very backbone of the nuns monastery. Sadly, however since ill-health began to overtake her capacity to fulfil all her duties, in 2011 she had no choice but to resign as abbot.

Together she and Venerable Bhikkhuni Seri (her carer and disciple) now* reside at Patacara Bhikkhuni Hermitage, located approximately 25 minutes drive away from Perth city.

*Note: Ajahn Vayama has since passed away, she died peacefully on Saturday, 20 Nov 2021. 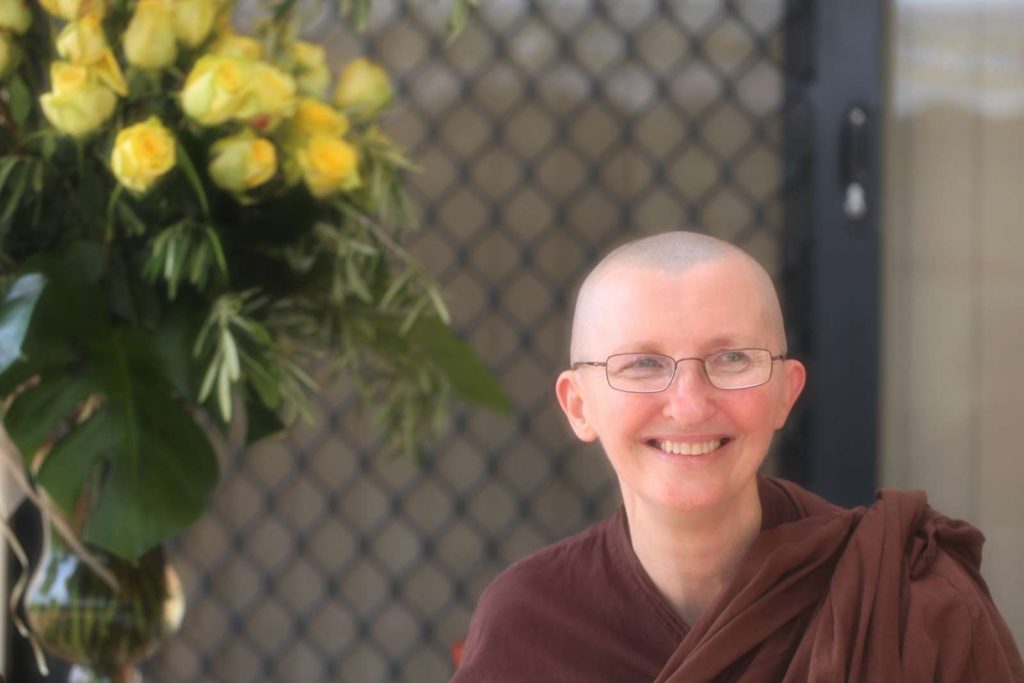 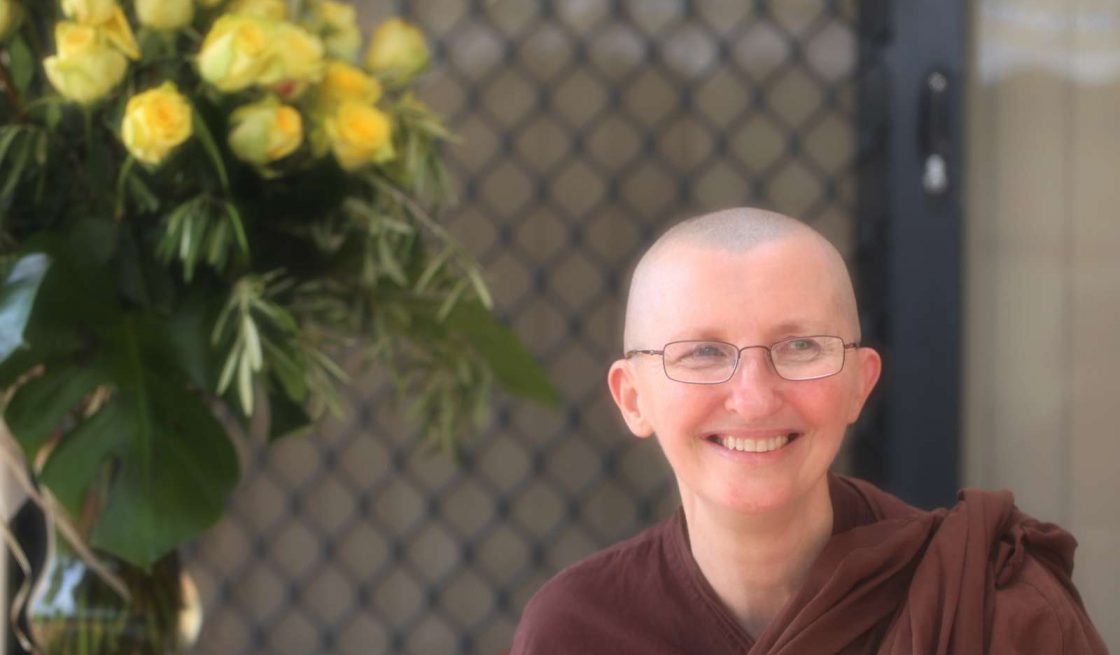