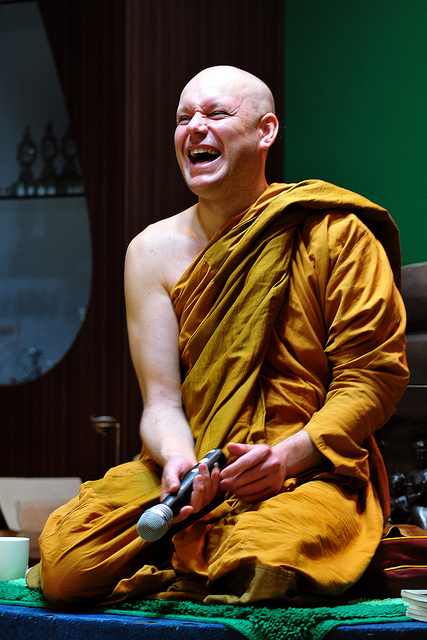 Ajahn Brahmali was born in Norway in 1964. He first became interested in Buddhism and meditation in his early 20s after a visit to Japan. Having completed degrees in engineering and finance, he began his monastic training as an anagarika (keeping the eight precepts) in England at Amaravati and Chithurst Buddhist Monastery.

Ajahn Brahmali’s knowledge of the Pali language and of the Suttas is excellent. Bhikkhu Bodhi who translated most of the Pali Canon into English for Wisdom Publications called him one of his major helpers for the recent translation of the “Numerical Discourse of the Buddha”. He has also published two essays on Dependent Origination and a book called “The Authenticity of the Early Buddhist Texts” with the Buddhist Publication Society in collaboration with Bhante Sujato.

The monastics of the Buddhist Society of WA (BSWA) often turn to him to clarify Vinaya (monastic discipline) or Sutta questions. They also greatly appreciate his Sutta and Pali classes. Furthermore he has been instrumental in most of the building and maintenance projects at Bodhinyana Monastery and at the emerging Hermit Hill property in Serpentine.

Apart from the regular talks at Dhammaloka Centre in Perth Ajahn Brahmali and Ajahn Sujato have also lead two ongoing courses on Early Buddhism and Kamma and Rebirth in 2014 and 2015.

Ajahn Brahmali’s clear and thoughtful talks make the teachings of the Buddha easily accessible to all. As his teachings and Sutta Retreats in Australia were getting more and more popular over the years and as the word about him spread, he started to travel to Singapore, Indonesia and Sri Lanka recently to share his knowledge and experience.