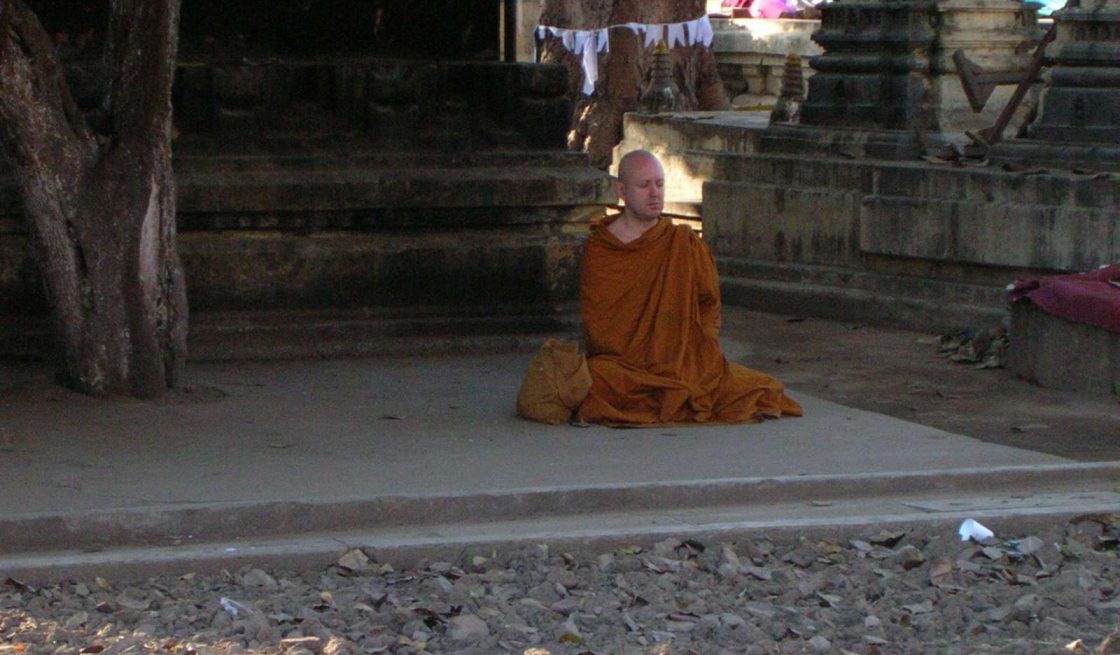 Ajahn Brahm is the popular Buddhist teacher to a growing international audience of people keen to learn meditation and develop a deeper spiritual understanding. He is also the founding father of an emergent Australian forest tradition of Buddhist monasticism focused on being true to the original roots of the Buddha's Teaching of Dhamma and Vinaya.

Ajahn Brahmavamso Mahathera (known to most simply as Ajahn Brahm) was born Peter Betts in London, United Kingdom in August 7, 1951. He came from a working-class background, he went to Latymer Upper School in London and from there won a scholarship to study Theoretical Physics at Cambridge University in the late 1960s. At Cambridge he joined the university’s Buddhist Society and after a few weeks at the age of 18, he saw a monk for the first time. He knew then that was what he wanted to be. After graduating from Cambridge he taught in a high school for one year before travelling to Thailand to become a monk. 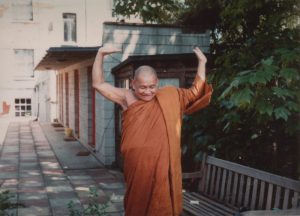 The late Thai meditation master, Ajahn Chah, was the teacher of hundreds of monks, including Ajahn Brahm

Ordained as a monk (bhikkhu) by Somdet Buddhajahn at Wat Saket in Bangkok in 1974, Ajahn Brahm travelled to north-east Thailand in January 1975 and became a student of meditation master Ajahn Chah at Wat Pa Pong. In that same year he became a founding sangha member of Wat Pa Nanachat, a monastery established close by to Wat Pa Pong by Ajahn Chah to cater to the increasing number of Westerners that were coming to ordain and train with him. Ajahn Brahm became the vinaya (code of monastic discipline) master at Wat Pah Nanachat from 1975 until his departure in 1983. His vinaya notes are still authoritative for most Western Buddhist monks in the Theravada tradition.

He was invited to Perth by the Buddhist Society of Western Australia (BSWA) in 1983 along with fellow monk, Ajahn Jagaro. Later that year the BSWA purchased rural land in Serpentine south of Perth. Ajahn Brahm became the co-founding monk and deputy abbot of Bodhinyana Monastery in late 1983. 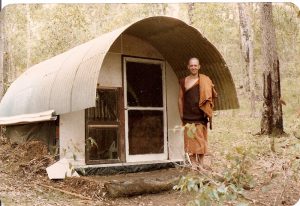 Ajahn Brahm with his first hut at Bodhinyana Monastery

In 1995 Ajahn Brahm become the abbot of Bodhinyana Monastery upon the departure of Ajahn Jagaro. In 2004 Ajahn Brahm was awarded the John Curtin Medal for his vision, leadership and service to the Australian community, by Curtin University, and in 2006 the King of Thailand conferred upon Ajahn Brahm the title “Tan Chao Khun” which is something akin to being appointed a bishop. As a result Bodhinyana Monastery receives a symbolic monk’s robe every year from the King of Thailand, a sign of royal patronage of the monastery.

Ajahn Brahm co-founded (with Ajahn Jagaro) Bodhinyana Monastery in Serpentine. He literally contributed to the building of this monastery as he built most of the structures with his own hands alongside his fellow monastics. Later he would be instrumental in assisting with the establishment of Dhammaloka Buddhist Centre in Nollamara. During this entire period spanning three decades he has been a lead teacher at this centre, and in the broader community. 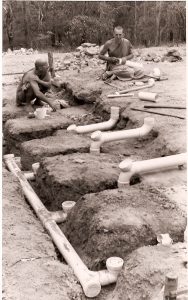 Drawing on his experience leading the establishment of Bodhinyana Monastery, Ajahn Brahm helped with both the design and fundraising for Dhammasara Nuns’ Monastery in Gidgegannup. Established in 1997 with a single Australian nun, Dhammasara has grown in both its facilities and the sangha (community) of nuns training there. In October 2009 he assisted in the first bhikkhuni ordination in Australia.

From 2006 he led the fundraising and development of Jhana Grove Meditation Retreat Centre, a world class meditation retreat facility with 60 guest rooms which is in use all year around either by the BSWA or other meditation groups. In 2012 Jhana Grove served 1300 retreatants. Places on Ajahn Brahm’s meditation retreats are typically booked out in a matter of minutes due his popularity as a meditation teacher.

In 2013, began building work on “Hermit’s Hill”, an extension of Bodhinyana Monastery. Bodhinyana is the largest Theravadan Buddhist monastery outside of Asia, and there is a long waiting list of men who wish to ordain at Bodhinyana, but cannot be accepted due to the limited accommodation and facilities. Ajahn Brahm is taking the first step to expand opportunities for monastic ordination and practice by expanding Bodhinyana with the purchase of another 100acres of land which is currently having huts built upon it to accommodate future monks.

The royalties raised from sales of these books goes to the activities of the Buddhist Society of Western Australia. He has also authored numerous other books and essays on meditation and other spiritual topics which are for free distribution, like the popular, “Basic Method of Meditation” aimed at those new to meditation.

In 2001 Ajahn Brahm gave his blessing to recorded audio talks being posted on a new BSWA website. The popularity of these talks gradually took off. Over time the recording and posting of these teachings evolved with both the demand and new technologies driving change: from podcasting to YouTube to live streaming. Currently, well over a hundred thousand talks are listened to online each month, taking into consideration the downloads from the website , the BSWA YouTube channel, and live streaming audience.

As of 2016, the BuddhistSocietyWA YouTube channel alone has had over 14 million views in ten years, and has more than 80,000 subscribers. The number of people finding the appeal of these teachings online is steadily growing over time.

Ajahn Brahm is the Abbot of Bodhinyana Monastery in Serpentine, WA, (1995 to present) and the Spiritual Director of the Buddhist Society of Western Australia (1995 to present), the largest Theravadan Buddhist organisation in Australia with thousands of members from over 30 ethnic groups. The BSWA supports Dhammaloka Buddhist Centre in Nollamara (for providing teaching and services to the lay community), Bodhinyana Monastery in Serpentine for monks, Dhammasara Monastery in Gidgegannup for nuns, and Jhana Grove Meditation Retreat Centre for year round meditation retreats in Serpentine.

In addition to this, he is founding Chair of the Australian Sangha Association from its inception in 2007 to the present. The ASA is an organisation comprising of monks and nuns from the various Buddhist schools (Theravadan, Mahayana and Tibetan) resient in Australia. Its aim is to bring the schools of Buddhism together to foster common understanding, and to represent Buddhist monastics to government and the broader community.

His influence is by no means confined to Western Australia, as he is also Spiritual Advisor to the Buddhist Society of Victoria (1995 to present), and Spiritual Director of Santi Forest Monastery in New South Wales (2000 to 2006, and 2012 to present), which is a monastery for Buddhist nuns. 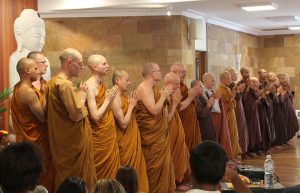 In recent years has led the way for gender equality in religion. He was instrumental in ensuring equal opportunity for Buddhist nuns (bhikkhuni) in the Theravada tradition by supporting full nuns’ ordination. For this courageous act he was persecuted by being expelled from his own lineage. This was very controversial within the international Buddhist community because the lineage of bhikkhunis in Theravadan Buddhism is considered by many to have died out. Such ordinations have been banned in Thailand. Whilst Ajahn Brahm was applauded by many in Australia for taking bold action to establish equal conditions for women entering monastic life in Australia, he was also strongly criticized by many monks in Asia.

In 2014, he was invited to be a speaker at the United Nations Vesak Day (most significant holy day for Buddhists) conference in Vietnam, the title of which was “Buddhism and the UN Millenium Development Goals”. Ajahn Brahm submitted his talk on the topic of “Gender Equality in Buddhism” which was United Nations Millenium Development Goal #3. The talk was accepted, but on the eve of the conference he discovered that his talk had been cancelled. This has led to an international petition to the conference organisers and raised a good deal of debate in the media in Buddhist countries like Thailand, Singapore and Vietnam, bringing reform within Buddhist institutions closer to enable equality of opportunity for women.

Ajahn Brahm has become a renowned Buddhist leader, and like the Dalai Lama often speaks out when there is social injustice and breaches of human rights. For instance, he has spoken out publicly on numerous occasions about the harm done by homophobia, and has been strongly supportive of gay marriage. He has embraced multiculturalism in action through being the leader of a highly diverse community in Perth. He has spoken out about the plight of asylum seekers, and he has taken concrete action to ensure that women have equal status and opportunity (as mentioned above). 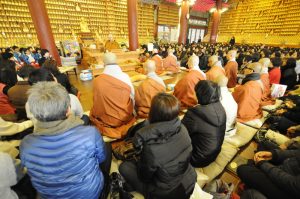 Ajahn Brahm teaching in Korea in 2013

Ajahn Brahm is an spiritual ambassador for Australia as he frequently travels the world, especially in Asia where he gives talks to large crowds up to 10,000 strong. He is the Spiritual Patron of the Buddhist Fellowship of Singapore (2000 to present), and Spiritual Patron of the Ehipassiko Foundation of Indonesia (2011 to present). He was the Leader of the Australian delegation to the World Buddhist Summit in 2002, 2005, 2008 and 2014, and the inspiration behind the Brahm Education Centre in Singapore, and the Ajahn Brahm Society in Sri Lanka. He has met with (and been served tea!) by the Sri Lankan President Mahinda Rajapaksa, had an audience with the royal family in Bhutan, and been accorded Royal patronage by the King of Thailand. Everywhere he goes he projects a peaceful and wise presence. In this way he has been building bridges between Australia and other countries, particularly our close neighbours in Asia. This culminated in the BSWA hosting the 4th Global Conference on Buddhism in Perth in 2006, and the 9th Global Conference on Buddhism again in Perth in 2015. These two day conferences draw in thousands of attendees, a large portion from overseas.

This high standing for Ajahn Brahm has raised the profile of Buddhism in Australia and given the local community a greater sense of confidence. There are many people who’ve migrated to Perth to live under his spiritual guidance. Ajahn Brahm is at the centre of a growing community developing a uniquely Australian Buddhist identity.

For 31 years Ajahn Brahm has been serving the community by offering wise advice and compassion to anyone who comes to him, regardless of the race, gender, religious belief, or social status. He always focuses on serving the person or people in front of him at any one time, be that a person with terminal cancer, someone suffering from depression, a prisoner, someone dealing with marital problems, a dedicated meditator, or anybody at all without any discrimination. His aim in life is to teach people how to be happy and overcome their suffering in life. From humble beginnings to teaching hundreds of thousands of people each month, either in person or online, the popularity of his talks today attest to the effectiveness of the practical advice that he offers, delivered with humour and kindness. Since coming to reside in Australia Ajahn Brahm has contributed extensive service to the wider community through: 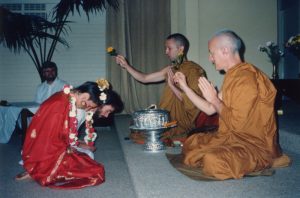 Ajahn Brahm has rendered extensive service to the growing Buddhist community in Perth and Western Australia through providing such services as funerals, hospital visits, including counselling those with terminal illnesses, wedding blessings, counselling services, presiding in the role of celebrant at important occasions in the Buddhist calendar.

Ajahn Brahm has frequently appeared in the media both in Australia and overseas. Some of the Australian media appearances include: 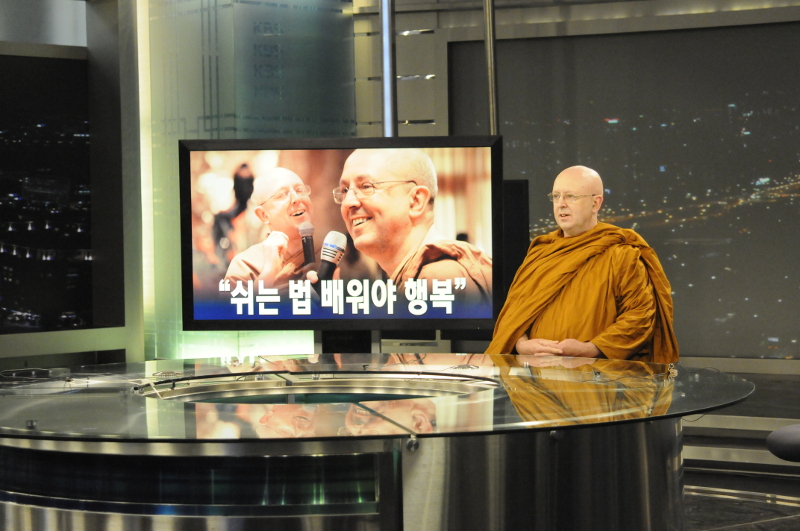 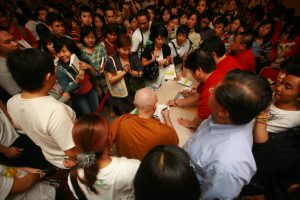 Ajahn Brahm at a book signing in Indonesia, 2010.

Ajahn Brahm continues to inspire, and according to his own words, “most people retire when they turn 70, but a monk’s working life doesn’t start until 70, so I’ve barely started”. His life’s work is to teach people the path to inner contentment and peace through developing virtues like compassion, wisdom and mindfulness. No one can say for sure how his desire to help people develop their spiritual qualities will manifest, but at the present time Ajahn Brahm continues:

And despite all that he has given and continues to give, he lives simply in a small hut in the forest, has no money or bank account, and enjoys nothing more than a cup of tea and sitting in meditation. 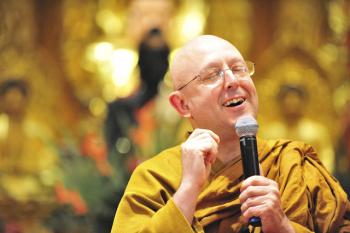