The Ajahns of Stocker Rd

Ajahn Santutthi, Ajahn J.R. and Ajahn Sukhakamo are currently residing at Dhammayanaram Monastery, home to the Cambodian Buddhist Society of Western Australia. Our mission is to create a new space for monks to live on the adjacent property - 48 Stocker Rd.

Born to a family of Vietnamese refugees, Ajahn Santutthi was in training to become a chef before discovering Buddhism at the age of 21. At age 23 he’d decided to “give it all up” and walk the path of the Buddha. He was ordained at Bodhinyana monastery by Ajahn Brahm in 2005. After 7 years he left to assist Ajahn Khemavaro at Wat Buddha Dhamma in Wisemans Ferry, NSW. After returning to Perth he came to Wat Dhammayanaram in July 2018. While providing teachings and support to the lay community he is also working to develop the 10-hectare Stocker Rd property in order to provide a residence for Buddhist monks. Ajahn has been a monk for 15 years.

“J.R.” as he’s usually known was born in Sydney in 1977. He grew up in Greenwich before moving to Perth with his family in 1996. There he studied software engineering and upon finishing his degree he spent several years in Melbourne where he worked in software development. Though successful in his career, he found something was lacking. Getting interested in Buddhism he came across Ajahn Brahm’s “Basic Method of Meditation” and started listening to some of the recorded talks at Dhammaloka. Thus inspired he returned to Perth, paid off his debts and ordained as an anagarika in 2006. He took higher ordination in 2009. Though most of his monastic life has been spent at Bodhinyana Monastery training with Ajahn Brahm he has spent time at Wat Buddha Dhamma in NSW, Na Uyana in Sri Lanka and Newbury Buddhist Monastery in Victoria. Ajahn has been a monk for 11 years.

Ajahn Sukhakamo is our resident Cambodian monk. He has resided at Dhammayanram Monastery for 7 years. In Cambodia he earned degrees in Buddhist Studies and Archaeology. He is currently studying English at TAFE and his next project is to write a better biography. Ajahn has been a monk for 11 years. 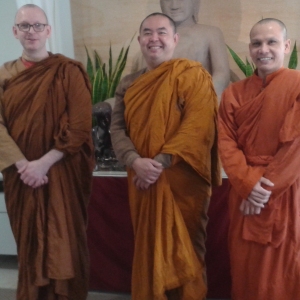