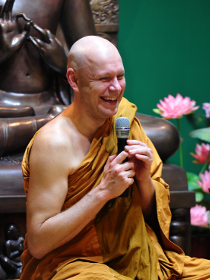 ordaining as a monk at bodhinyana

ordaining as a monk

Home / our locations / ordaining as a monk at bodhinyana

Bodhinyana is the largest Buddhist training monastery in Australia with considerable interest from men wanting to ordain both from within Australia and abroad. Ordaining as a Buddhist monk is a big commitment and requires aspirants to pass through stages which require greater degrees of commitment and higher standards of monastic discipline (vinaya), which include no contact with money, the opposite sex, and require harming no animals or even insects.

Before the monastery can consider new applicants for ordination, we require them to first come and stay with us as a guest for up to one month. That way they will be able to get to know the community, our environment and the standard of practice at Bodhinyana without making any long term commitments. For more information about staying at our monastery as a guest click here.

After spending some time getting acquainted with us, typically we ask the applicant to leave the monastery and go back to lay life. Having let us know that they wish to pursue ordination we will add them to the ordination waiting list. The list is often very long as there is only so much space available for community members. In addition to the long list, we are required by law to give preference to Australian citizens and permanent residents. Thus if you are from overseas it may take a very long time before an opportunity arises. In any case, patience and persistence is a good quality to develop.

Sooner or later as applicants move up the waiting list, the monastery will get in contact and offer a space. After returning to the monastery, and after an initial trial month the Anagarika candidates can ask Ajahn Brahm and the Bodhinyana Sangha for approval to be ordained as an eight precept Postulant.

Life as an Anagarika

The men with shaven heads and wearing white, while keeping the eight precepts, are called Anagrikas. It is their intention to become a 10 precept novice monk in the near future.

There is quite a lot of work involved, supporting the monks and doing various jobs around the monastery. This includes:

There are four rooms available in the Anagarika block. Each room has a walking meditation path and provides privacy and peace for the resident. When these rooms are full, rooms in the nearby male guest block may be provided.

Training is also provided and includes:

After one year as an Anagarika it is possible to ordain as a novice monk – a Samanera. This is subject to the approval of the whole Sangha of the monks at Bodhinyana Monastery. The following should be noted:

Full ordination as a Bhikkhu is possible after a year as a samanera. Again this is subject to approval by the whole sangha. With full ordination comes the responsibility to keep all the rules of the vinaya. This is the last stage of ordination and the monk is now a member of the sangha.